What did I know about Agartala, other than it was Tripura’s capital?

To tell you the truth, I did the mandatory reading and research befitting a traveller on her maiden visit but nothing quite prepared me for the place or the surprises tucked away. 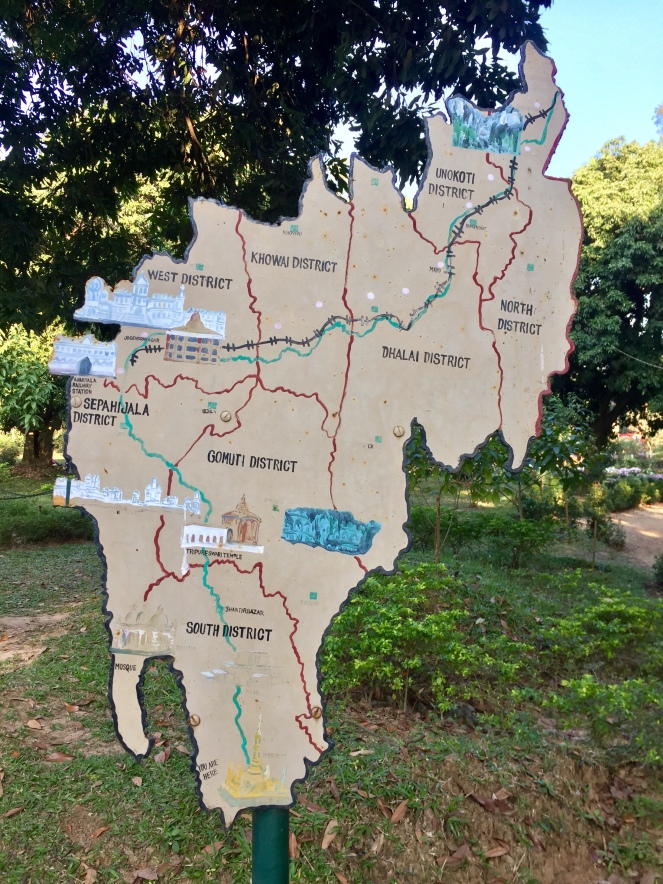 This post is therefore devoted to my Dora the explorer persona, a travelogue of all the things in Agartala that made me go “Oh! Aha! Wow!”

Let’s begin with the name.

Well for starters, I was traipsing through the Heritage Park located in the heart of the city and I saw the sign.

Incidentally the Heritage Park is worth a visit; the totem poles by the side of the winding footpaths, native or not, definitely elicited a wow!

By the time I came across the terracotta/ jute/ seed jewellery in a souvenir shop, I was hooked. 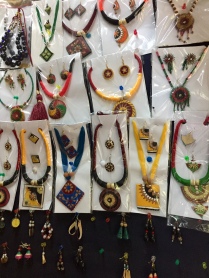 Had a Lilliputian moment- a miniature railroad track ran all over the emerald green lawns connecting scaled replicas of famous temples, palaces, monuments from the state. I quickly took notes, it really was a smart way to get a taste of the must see places.

Anyway here’s what I did a great deal- walked to observe and savour the flavour of the city. Incidentally that was how a morning walk to avoid the maddening vehicular and chaotic pedestrian rush turned into an adventure of a different kind.

One moment I was marvelling at the versatility of corrugated metal sheets, they were everywhere- as roofs, fence, cluster of shacks and the next thing I know, I was drawn to the sight of red and green veggies beautifully laid by the side of the dusty road. 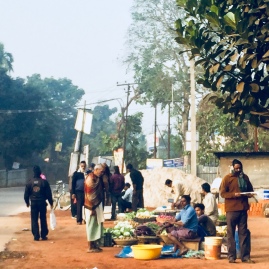 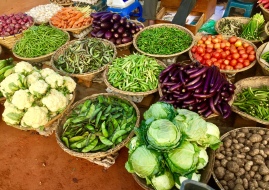 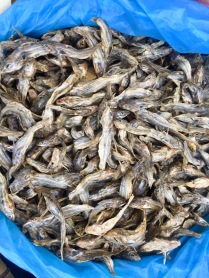 Also how can I forget the fish, live ones swimming in coolers, dead ones neatly lined and a variety of dried ones in colourful sacks. Needless to say, fish was number one dish.

Browsing around, spotted some tiny plump yellow bananas and orange berries lying at the foot of a bench. The latter turned out to be betel nuts, a far cry from the humble supari in paan and mouth fresher.

On the table were bags stuffed with white flowers for sale, Rs 10 a packet. Apparently the flowers were edible, they made lip smacking pakoras (fritters) .

Hmm…that leads me to the highly recommended, Agartala’s most popular restaurant and sweet shop, Sherowalli, literally meaning the Goddess who sits astride a tiger.

I challenge you to walk in and not be awe struck by the sheer variety of Indian sweets. Also every sweet had a quaint name unlike any I had heard.

The guy behind the counter was amused when I asked him for his bestselling sweet; I was swamped by choices.

He helpfully said, “Each sweet is sold by piece instead of weight. Great way to taste everything.”

I had two boxes packed.

Did I mention, Sherowalli is also a travel/ transportation company on the side.

So out of the shop and into the street for ready to eat food of every kind- sweet, savoury, steamed, fried or tossed, served in tiny paper plates and cones.

Astonishingly the vendors everywhere happened to be women manning the stall/ cart and I’m talking of aggressive women shrilly urging the passerby to taste their ware- in Bengali.

Oh yes! Bengali is what is spoken everywhere. You may find a few Hindi or English speakers if you are lucky. I became quite proficient in nodding, gesticulating and mumbling my responses that surprisingly passed off for the language.

Not so much when I was presented with a fruit turned into a pretty flower on a stick.

Talk of sheer surprise and delight.

Amra or the Jungli Aam was crunchy and sour with a hint of sweetness, sprinkled with chilli powder and salt to balance the taste.

Another memorable moment was witnessing the India- Bangladesh bonhomie at Akhaura border.

I was there for the flag lowering ceremony conducted in the evening after which the India-Bangladesh border is closed for the night.

I watched it for the first time and was impressed by the beautifully synchronised drill by the soldiers of both countries, without the aggression that one hears of at the Wagah border. 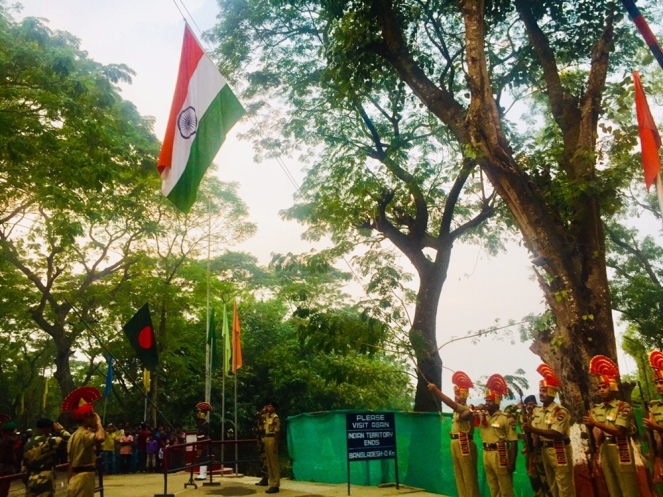 In fact there was a great deal of bonhomie between the two sides. The Bangladeshi soldiers happily came over the barrier to oblige the excited Indian crowd with perfect backdrop for their selfies and groupies. 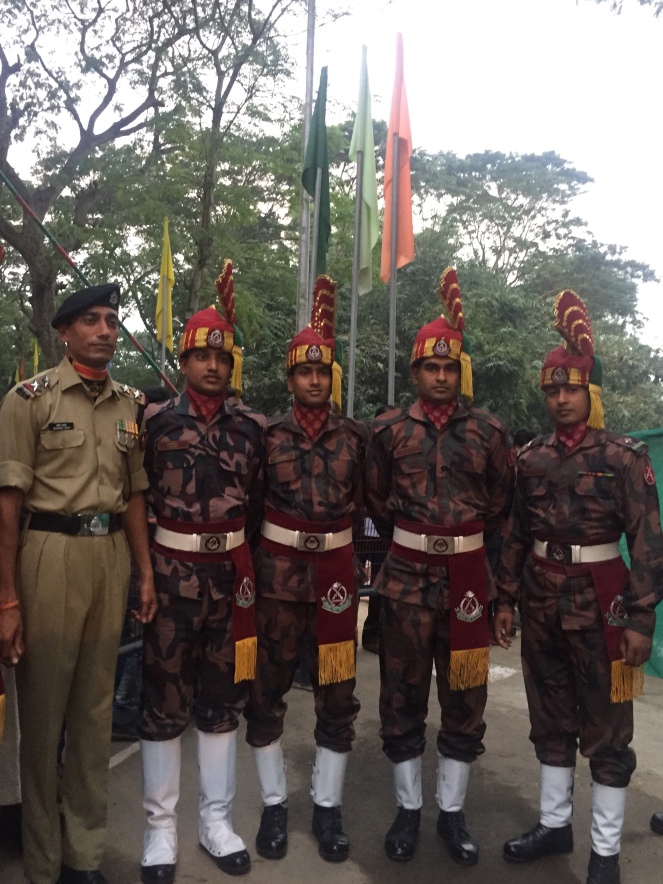 The Indian soldiers on the other hand maintained their distance and a keen watch to see whether anyone from the crowd jumps the barrier to our side, not that it stopped anybody from aiming the camera and shooting them; they were the stars of the show.

Finally it would be amiss of me if I don’t mention the Temple Trails.

Temples were prominently promoted as tourist destination. Here I saw religious trips merge seamlessly with gala family picnics. The people came dressed in their Sunday best with huge speakers that blasted peppy songs, everyone danced, they cut and cooked on the side and had a merry time.

Me thinks it’s a swell way to rejuvenate the body, mind and spirit.

So make a wish at Matabari Temple or Tripurasundari, I’ve been assured it comes true. Watch the fish at the temple lake, it’s not only therapeutic but will make you shout with glee for I swear the fish are fearless- they literally swim into your hand for the feed.

One can even check out the international border circling the lake of the Kasba Kali Temple at Kamlasagar. 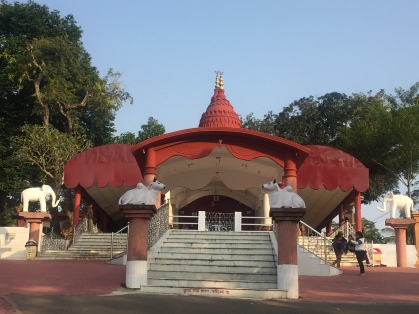 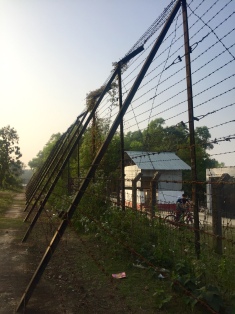 Interestingly offerings to the Goddess include prasad that is the delicious brown peda, garlands made of hibiscus flowers, multicoloured threads, vermillion, incense and candle.

This was also the first time I was asked for my name and gotra when I presented the tokri (woven basket) with the offering to the priest. I’m guessing he needed the information either to chant blessings or speak on my behalf to the deity.

There were so many temples in Agartala, some were huge, others small in comparison but they evoked a similar wonder and devotion. 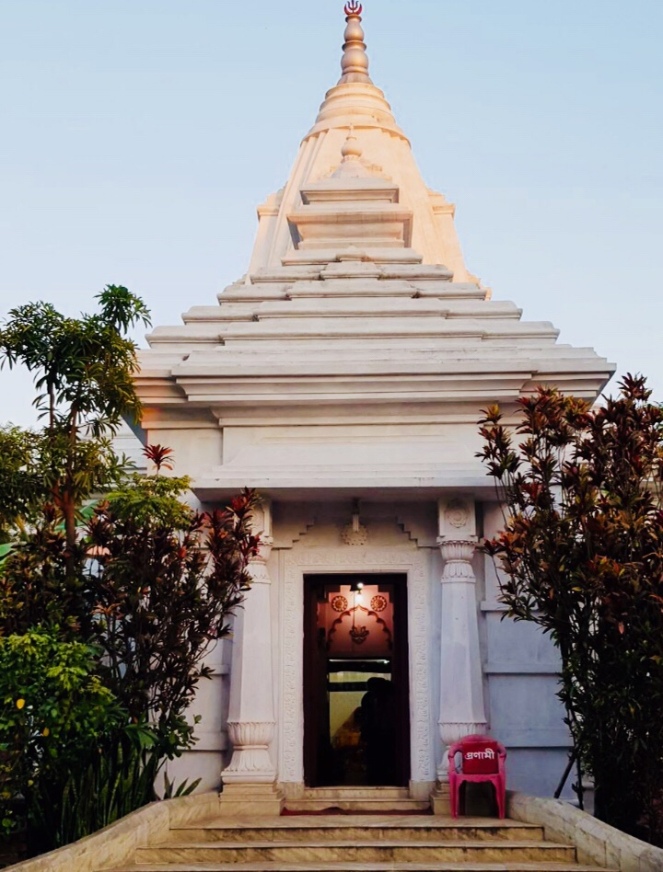 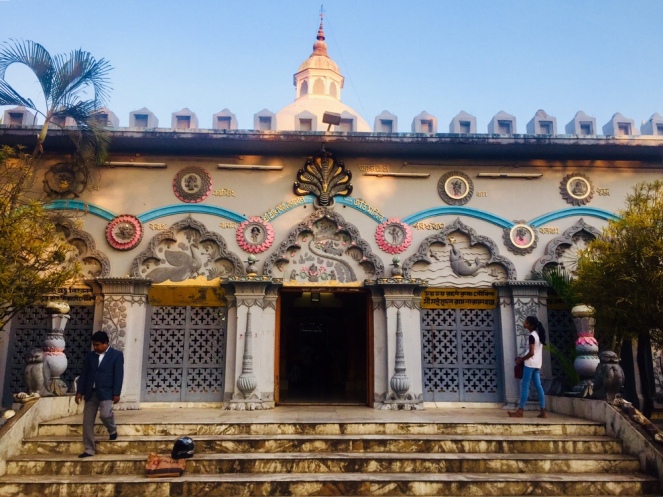 From the elegantly draped sarees on the street (that’s what almost every lady wore) to the sounds basting from the loudspeakers at every turn (either a religious discourse or a political meet), Agartala remained a kaleidoscope of colours and sounds.

It still took time getting used to the sun hitting the horizon early, daylight while the rest of the country was probably slumbering. The sun in fact set by 4.30 pm during winters which was very hard for me to wrap my head around. 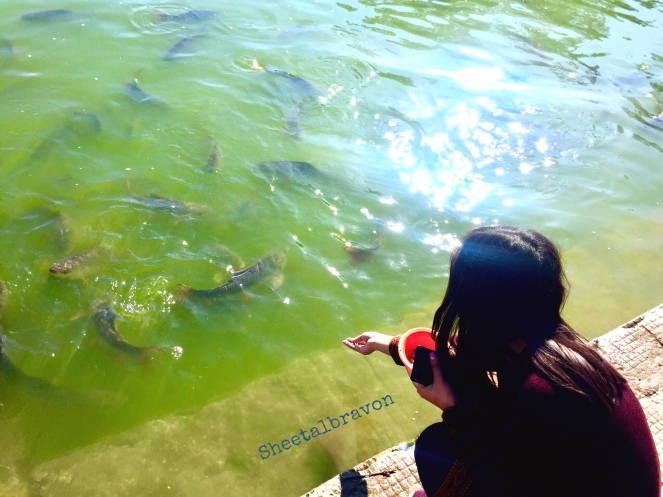 I came back with memories of a different world and a gallery full of photographs to reminisce over.

As Dora the explorer would say, “Yeah, I did it!”

PS: The featured photograph is of Ujjayanta Palacein Agartala.

21 thoughts on “Agartala Adventures-Things that made me go whoa!”