For me Pompeii always had a mystical aura around it.

To think, it was obliterated when it faced the fury of the Roman god of fire, Vulcan himself and then it rose like a Phoenix from its ashes and lava to become a legend.

Honestly, my imagination had run wild ever since I heard its story in school and don’t ever get me started on those grainy black and white photos of humans and animals frozen in surprise during their final moments. Nothing captures a teenager’s attention like macabre stuff.

Anyway the opportunity to see it all came last summer.

On Day 3 of my holiday, took the train from Rome to Napoli Centrale, Mami had bought the tickets earlier online.

From there we had to buy tickets for the local train, Circumvesuviana which would take us to Pompeii. I never realised purchasing tickets from a ticket counter would be easier said than done. We had a few anxious moments trying to figure how but eventually managed. Then it was just the matter of finding our way to the platform and waiting for the train.

Interestingly the Circumvesuviana reminded me of our local trains- they zipped in and out in quick succession, everyone raced in to grab a seat and they were mostly packed. We even came across an accordion player serenading the passengers in our train, for a tip naturally!

Disembarking with scores of other travellers at the Pompeii Scavi-Villa dei Misteri (quite a mouthful but that was the name on the board at the station), we were accosted with, “Pompeii/ Vesuvius tickets” and directed to an official looking counter at the station. It took us a while to figure out that the actual ticket counter for entering the ruins was further away.

By then it didn’t matter because we were already sold on the idea of a guided tour. The area was massive, no signboards to guide, the ruins looked remarkably same, the tour included the ticket price for Pompeii and there was a map. Also chances of getting lost on our own were pretty high.

That argument was pretty solid.

Soon we had a pretty guide, jauntily swinging her umbrella, shepherding our motley group at a cracking pace. We marched energetically behind her while she rapidly fired away bytes of information- History, mythology, architecture, commerce all coming together in a steady stream.

Her umbrella was a pointer and it also doubled as a beacon for the slow pokes and the shutterbugs. It was easy to lose her with many similar tour groups crisscrossing the area, most folks viewing the world through their camera lens.

The excitement was palpable as we walked through the gladiators cells and our pit stop, a magnificent amphitheater hardly looking its age. 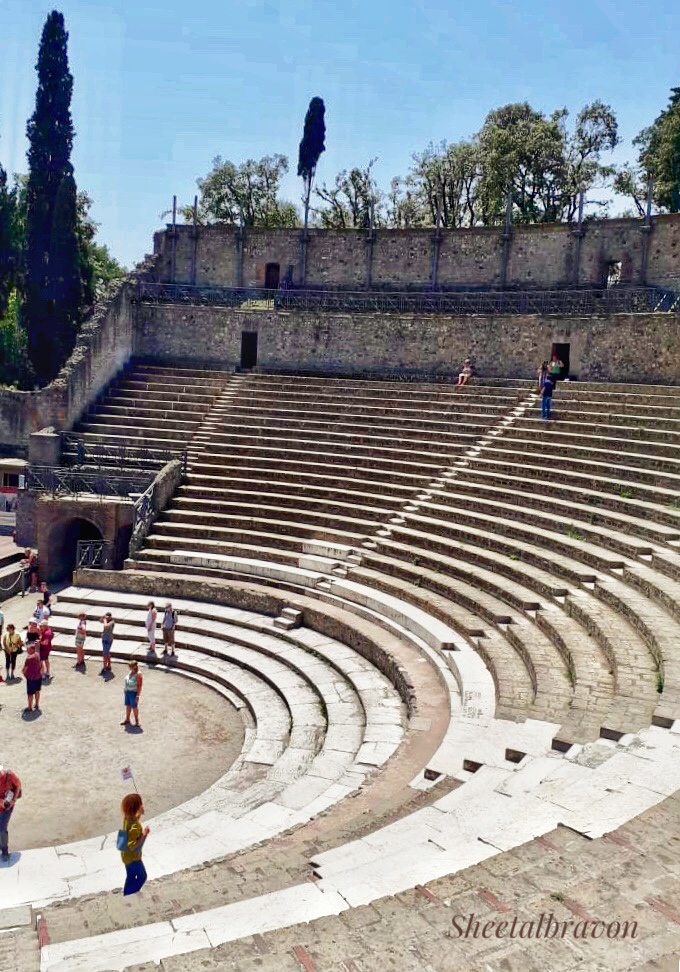 I could visualise the combat in this arena, the elite and the poor sitting and cheering quite like in the movies and then trapped when the mountain erupted.

We walked on beautiful cobbled roads, strolled through well preserved villas, admired the much intact and bright frescos, sauntered into Roman baths, spotted bakery and shops. 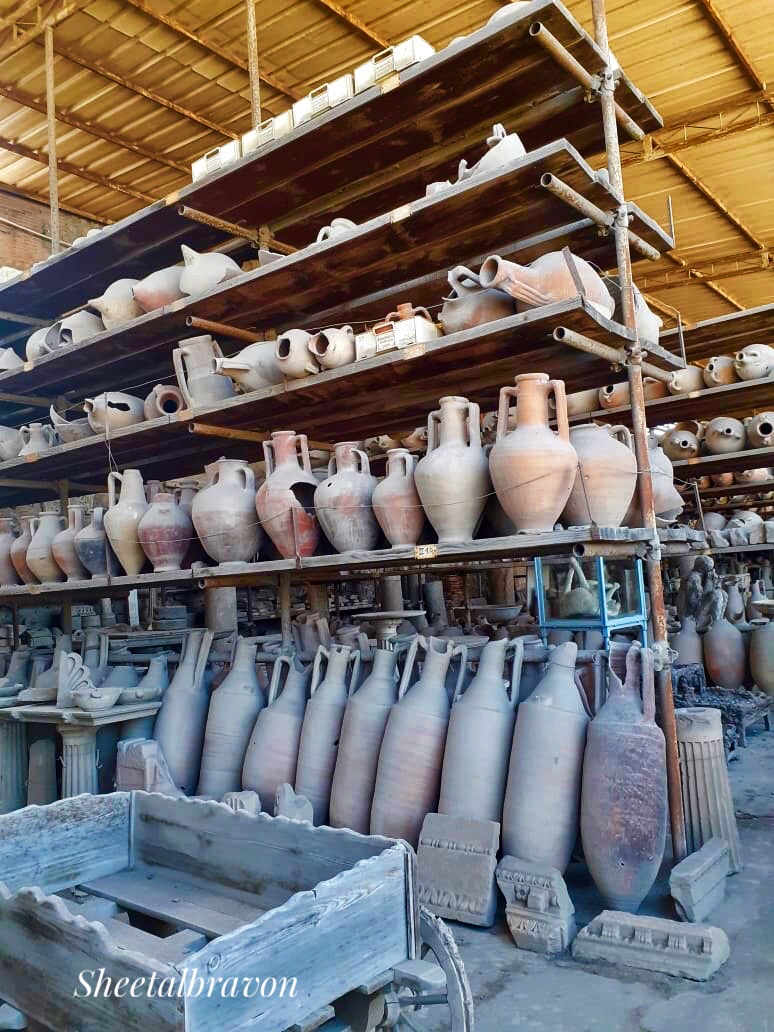 There was a section with a few plaster casts of people and animals in their final moment reminding me of the photographs that had fired my imagination once upon a time.

They were not encased in lava like I thought earlier.

Surprisingly, the walk also included a quick stopover at a brothel. Seriously, the ancient Romans certainly knew how handy pictorial signboards would be especially where language was a problem. Although seeing them now required visions of a hawk and a great deal of concentration to decipher the faded graphics; unfortunately I didn’t have either.

Anyway, by the time the blistering walk ended, I was a hot pink and my fair skinned companions were an alarming shade of red. It just happened to be a scorching day reminiscent of an Indian summer.

Yet, one couldn’t deny the ‘pinch me, I’m dreaming‘ feeling.

I was standing in the shadow of Vesuvius, surrounded by temples dedicated to Jupiter, Juno, Minerva, Apollo, names I had only read in the books. Venus, goddess of beauty and love was actually the patron goddess of this city!

Then there was a mesmerising centaur in flesh or rather in metal, slap bang in the middle of the square. 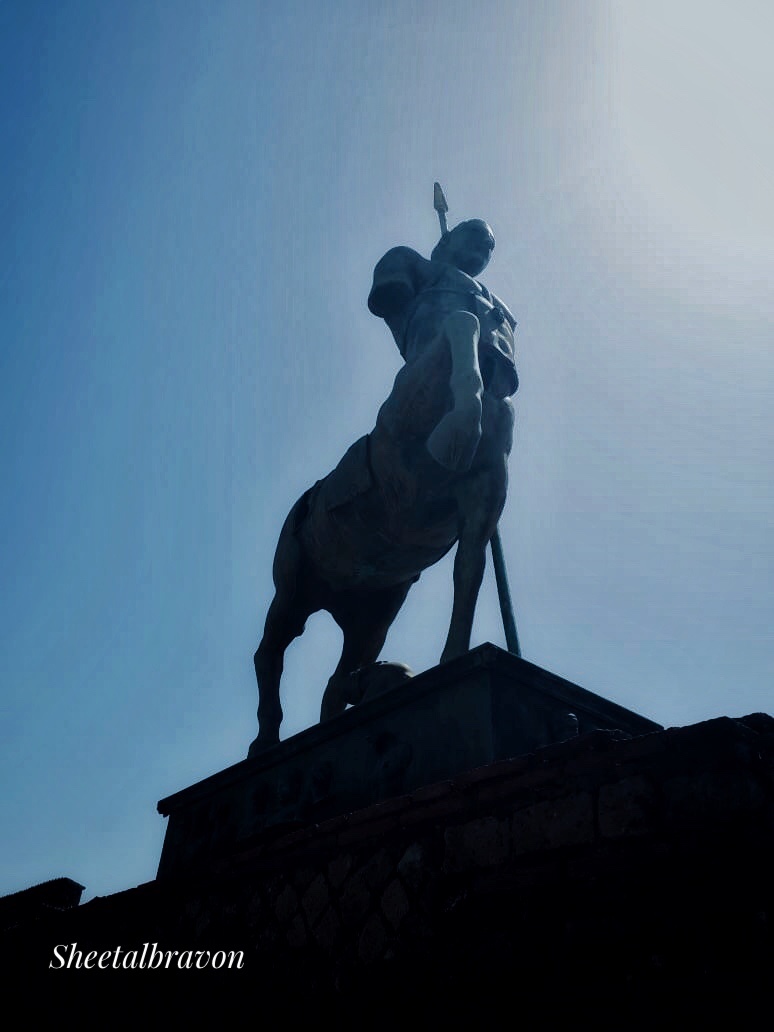 Google now tells me that it is the work of the Polish Artist Igor Mitoraj.

It fitted into my dreamlike scenario of running into one in the country of the Roman Gods perfectly.

J.M. Barrie said ,”Dreams do come true, if only we wish hard enough.”

wanderessence: The call to a place