“A Chinese poet many centuries ago noticed that to re-create something in words is like being alive twice.”

-Frances Mayes, Under the Tuscan Sun

Tuscany for me was Florence till I signed up for a day tour with lunch at a winery. I was truly excited!

Out of the three places the tour promised, only Pisa rang a bell and that too because of its famous tower.

Anyway, going all the way to Italy and not see it was simply unthinkable!

This was what I thought I’d see as soon as I’m there.

The Leaning tower of Pisa, completed in 1372, looking as magnificent as its pictures.

To reach it though, it took a short walk on streets that lead through a quiet neighbourhood. When we hit a wave of vendors and their stalls selling keychains, magnets, scarves and other souvenirs, we knew we were near.

The first thing I saw entering the premise was an orange Duomo taking the centre stage. 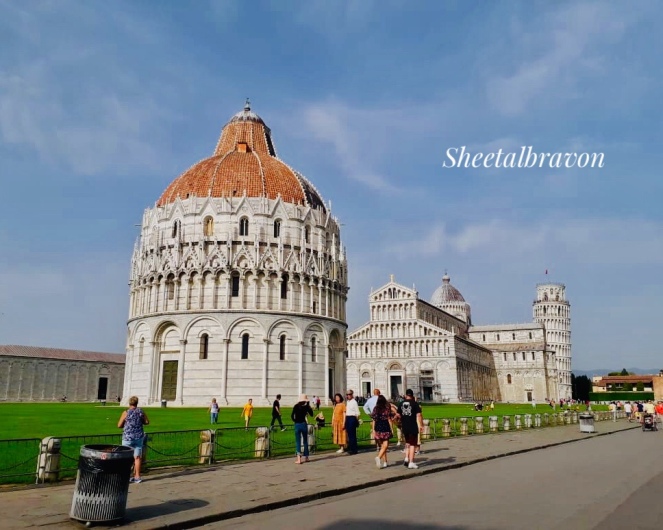 It was the magnificent Pisa Baptistery, supposedly the largest in the world, with its distinctive orange Duomo.

The colour scheme of saffron, white and green in the photograph reminded me of the Indian Tricolour.

Interestingly, the Leaning Tower was far back and appeared to be almost photobombing the picture.

Further along arose the Pisa Cathedral and that’s when I realised that the leaning structure was its campanile or the bell tower.

Also the grass was really that green.

Walked around to the back of these super structures and this gorgeous scene was spread out.

Here was a tower that leaned into fame. It was even more famous than its cathedral!

In-between the two, the sculpture of Capitoline Wolf (she-wolf with the mythical twin founders of Rome) was a delightful surprise.

In Pisa, this fantastic piece just laid there on the grass. There was no tag to identify the artist yet the sculpture just took my breath away.

Keats came to mind, “A thing of a beauty is a joy forever. It’s loveliness increases; it will never pass into nothingness! 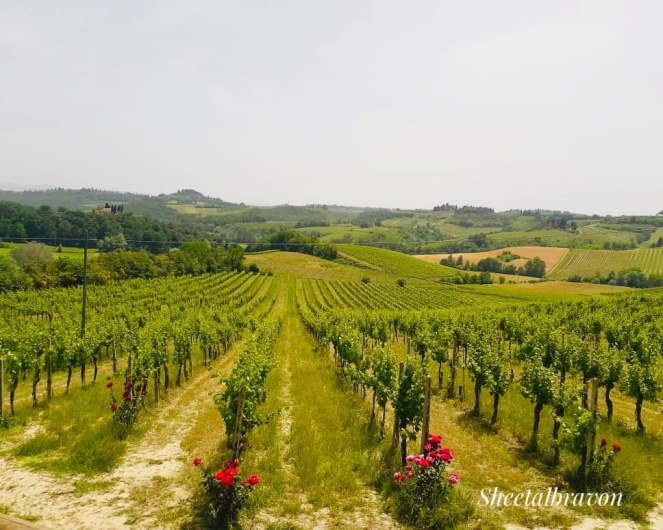 Those were the vines that produced the grapes that made the Toscana Wines.

Seriously, how green was this valley! 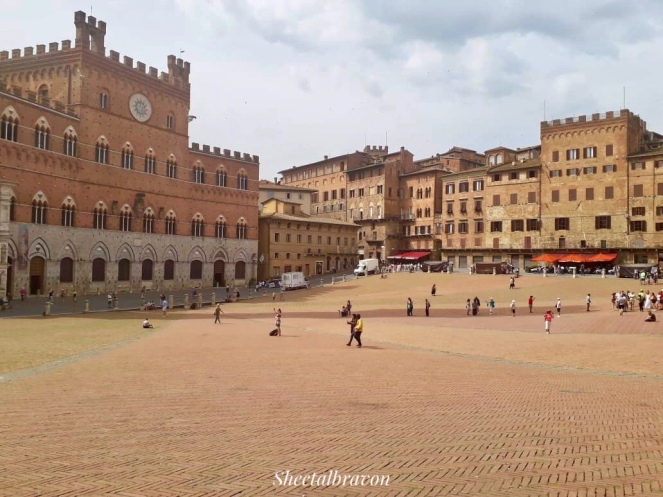 Siena, the town was all earthy like sienna, the colour- yellowish brown, natural earth.

This is the same Piazza del Campo where the famous horse race, Palio took place every year.

Siena’s seventeen contrade or districts, each with a special name and symbol, raced at this very spot for the top honours like the chariot race in Ben Hur except here it was a lone horse and its jockey.

If you had a house in a particular contrade, you signed up with that team for life.

The Dragon Contrade won the Palio in 2018.

It was a huge honour and that’s why the photo was in the dragon slot. It would remain there till the next championship.

That was our wonderful guide in Siena who rapturously gushed over the rivalry between the contrades, something like FC Barcelona pitched against Real Madrid in football or India v/s Pakistan in cricket.

Those scarves were the official merchandise for the different contrades.

They literally wore their hearts on their sleeves.

Duomo di Siena or the Siena Cathedral was a symphony in white marble, a contrast to all the earthy browns.

Did I know what treasure lay within ?

I did hear the guide say, “Don’t forget to look up and look down.”

The She-wolf of Siena grabbed eyeballs. 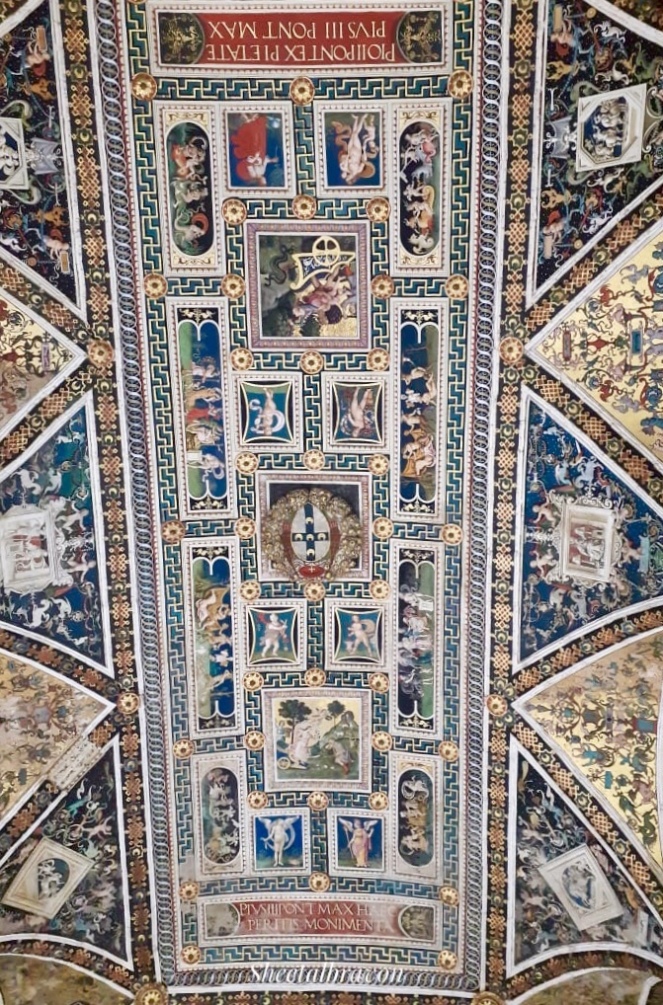 Found my world upside down.

Looking up was a must!

A library within the cathedral and not just any but with a lofty name Piccolomini Library.

Big brothers were watching in Siena.

Took a time machine to time travel to a Medieval Town.

The perfectly preserved village with picturesque street, pretty shops and a name that just rolls off my tongue, San Gimignano.

I felt I was walking in Kings Landing from the Game of Thrones. 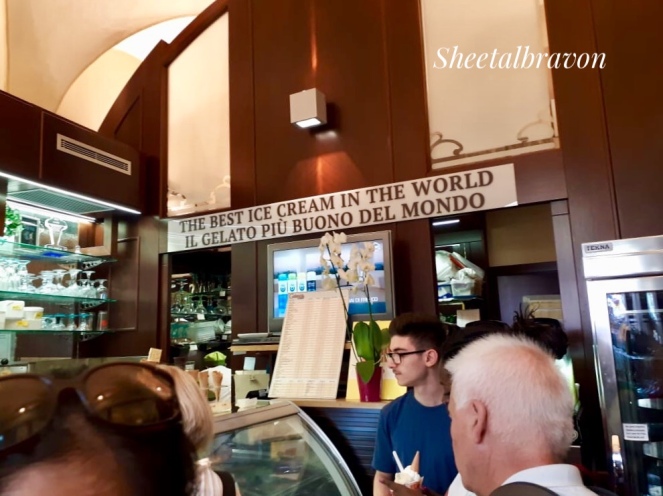 Do you believe in signs?

The best gelato in Italy, no the world !

It’s true, all you need is love and ice cream. 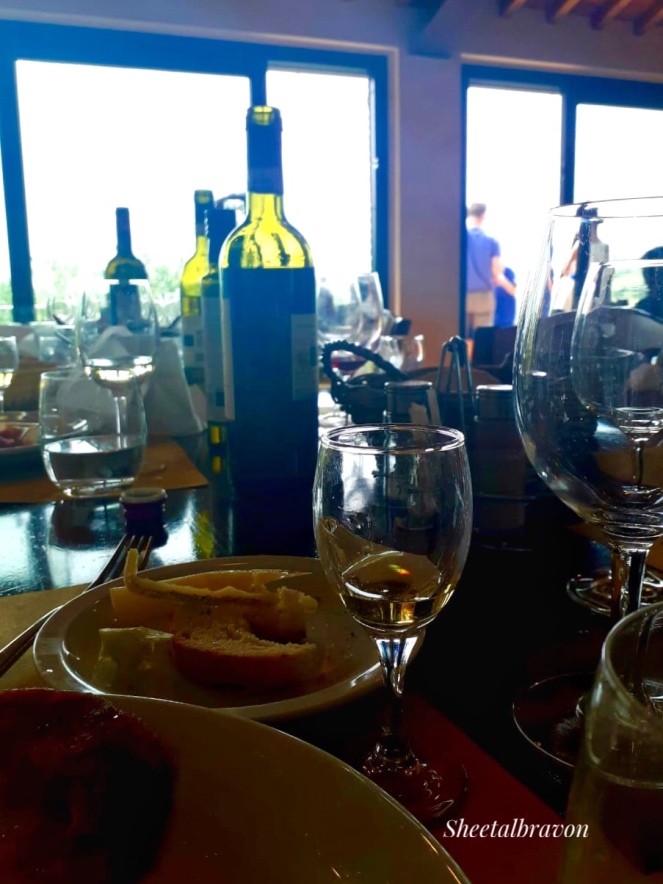 “Life offers you a thousand chances… all you have to do is take one.”

-Frances Mayes, Under the Tuscan Sun.

23 thoughts on “Travelling Into The Tuscan World”