I was in Florence for David, the one carved by Michelangelo.
He was everywhere but I was going to see the real him in the Galleria dell’Accademia, the Accademia Gallery.

Yes! I was giddy with excitement.

The Accademia was small compared to the last museum I visited which was Vatican but David wasn’t hard to miss. Already on a pedestal, he looked tall and glorious. One could circle around him, see him up close; he was beautiful. 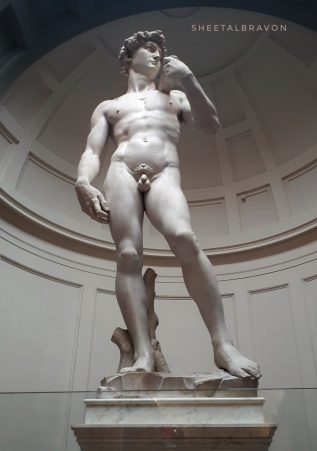 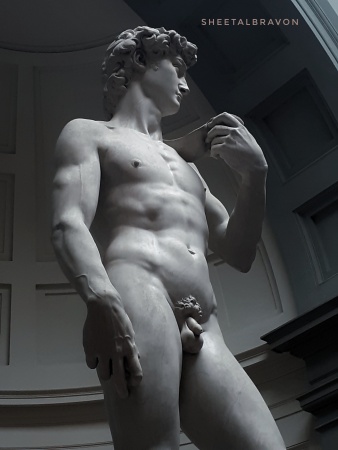 Arms of Steel!
I wonder did Medusa turn him into stone? The abs and veins running on his hands looked lifelike.
I suppose, one could stand and stare at David forever; he was the star and we were the paparazzi.
The only hitch was clicking a solo picture with him. Photo bombers everywhere.

Anyway, when the going gets tough, the tough gets going.

She begins exploring the Accademia.

5 Things to look out for other than David in the Accademia Gallery :

· The Prisoners by Michelangelo: – These were a series of sculptures placed along the path to David.

They looked unfinished, easily dismissed, till you take another peep. I glanced through my camera and saw this. Watch how his muscles strain to escape his stony bonds.

Mesmerizing!
· Pieta by Michelangelo: – I had seen Pieta in St Peter’s Basilica. So imagine my astonishment when I saw another by the same artist.

It said Pieta with Michelangelo’s name at the bottom but it was a whole new piece.

· Rape of the Sabines:- Please don’t judge this stunning piece by its name.

Placed in the centre of one of the halls, it had three figures entwined that pull your eyes upwards. Walk around it and see it from every angle; the view changes each time.

No walls, no bolts , no locks.

Then I learnt this beautiful piece under the spotlight was a plaster copy.

What of the original?

The original was in the entry free, open-air museum in Piazza della Signoria, Florence. It had scores of beautiful statues under a roof and pigeons who had the run of the place.

· The Plaster busts hall: – As the name suggests, there were plaster sculptures by the dozen in every shape and size. I was most fascinated by a row of plaster busts on a shelf.

It was Martin Sheen as Aziraphale in Good Omens.

Check out the picture below! The resemblance is uncanny.

· Museum of Musical Instruments: – A museum within a museum dealing with musical instruments.

I had heard of Stradivari violin, now I could see it too.

A row of computers with headphones by their side too sat in a corner. Using it was like playing an interactive game, except the theme was Western Classical music. You click on instruments, hear symphonies, read up its history and know the musicians.

The Accademia Gallery also had enough panels and paintings by masters known and unknown.

One site told me I had to keep my eyes open for Tree of Life. I did and here I thought it was a only a movie!

After a while, the art begins to blur and only David stands out.

Some Tips to make this a memorable experience :

· Pre-book your tickets online at the Accademia Gallery website. You get the date and time slot and can collect the tickets from a counter there. Standing in a queue never felt shorter!

· Best way to arrive at the museum tucked in one of the lanes is walking. Florence is a walker’s paradise.

· Keep an eye on the time; strolling in this gorgeous city can makes you lose it. I speak from experience.
· Read up on the stuff you expect to see in this museum other than David. It makes you feel a little less lost and the experience is better.

“The greatest danger for most of us is not that our aim is too high and we miss it, but that it is too low and we reach it.”

Travel is an experience and so is museum walking.

My last memory was stepping out into the street, wonderstruck.

What an unforgettable date!

16 thoughts on “Date with David”